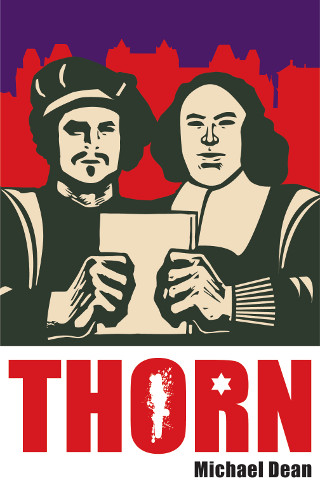 In 1656, at the height of The Dutch Golden Age, two giants of European culture meet: philosopher Baruch Spinoza, a Jew of Portuguese descent, and Rembrandt van Rijn, the greatest Dutch Master, find themselves inextricably linked through a failed mercantile venture and membership of the freethinking ‘Waterlanders’ which, in challenging the Calvinist doctrine of the day, pits them against the authorities in Amsterdam.

THORN is an astonishing book, very powerful, exciting, disturbing and also, at times, very funny. It remains true to the ideas of its protagonists Spinoza and Rembrandt. It links together two great men and makes the parallel that their lives were made almost impossible because they both sought the truth. It’s a powerful, shocking and moving story of religious intolerance and as such, more relevant today than it might appear on the surface. -- Award-winning author David Nobbs

A funny, provocative and pertinent historical novel. -- Manosque on Amazon